Should you hire the God of Mischief as your next CFO?

What does Loki have to do with the reasons we built an integrated system for CFOs like ForecastEra’s Revenue Navigator? Read on.

This article assumes that you’re up to date with the Marvel Cinematic Universe including their Disney+ streaming series. Time-traveling spoilers for Avengers, Endgame, and Loki abound. 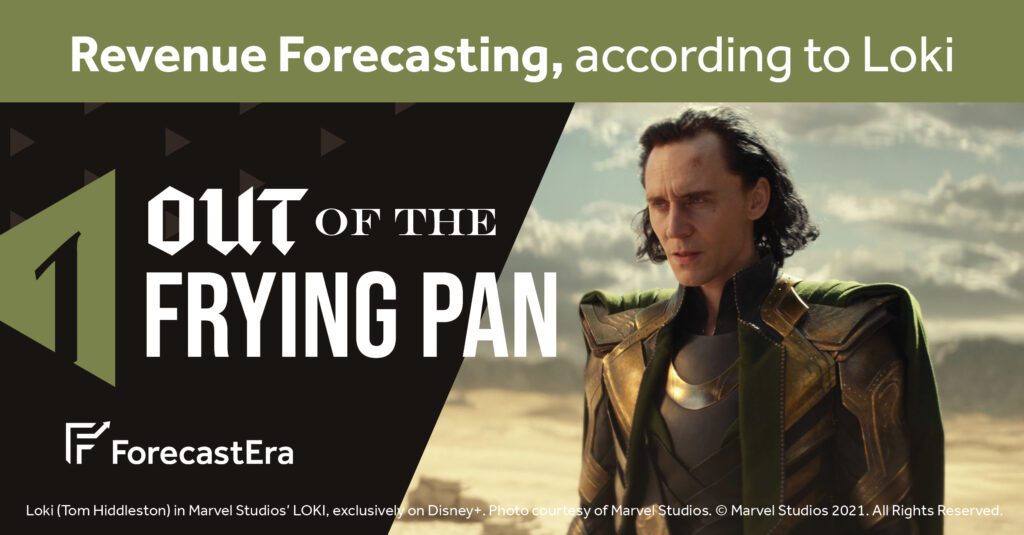 1. Out of the Frying Pan: Accidentally Stumbling into an Unknown Fate

The Loki series begins during the time heist in Avengers: Endgame.

The year is 2012. Thor’s adopted brother Loki, God of Mischief is apprehended by the Avengers.

In a key moment, a future Tony Stark from 2023 accidentally drops the Tesseract (the Space Stone). It slides unnoticed to Loki’s feet where he quickly grabs it and vanishes through a portal for parts unknown.

This escape, we’ll later learn, caused a “nexus event” where the timeline branched into a new direction. 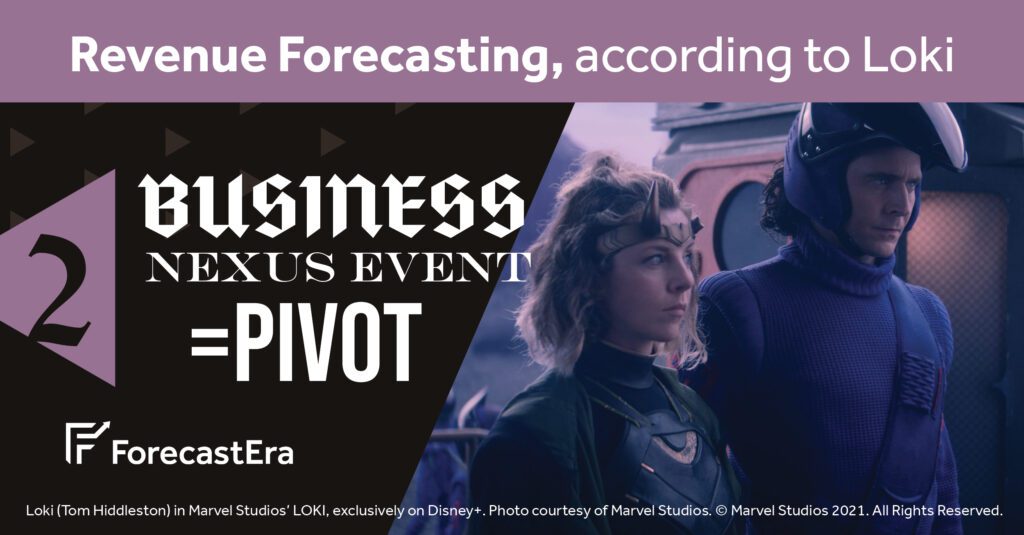 Whether a company pursues these opportunities often depends on the CFO’s scenario-building crystal ball.

Some choices seem easy, like Loki deciding to go from prisoner to escapee. But that choice ends up putting Loki in immediate mortal danger. A similar “easy” choice could do the same for your company.

Most CEOs are, by nature and job title, opportunists. It is the job of the CFO to be more grounded, and examine each gift horse in the mouth.

How can a CFO know if an opportunity is worth the pivot? 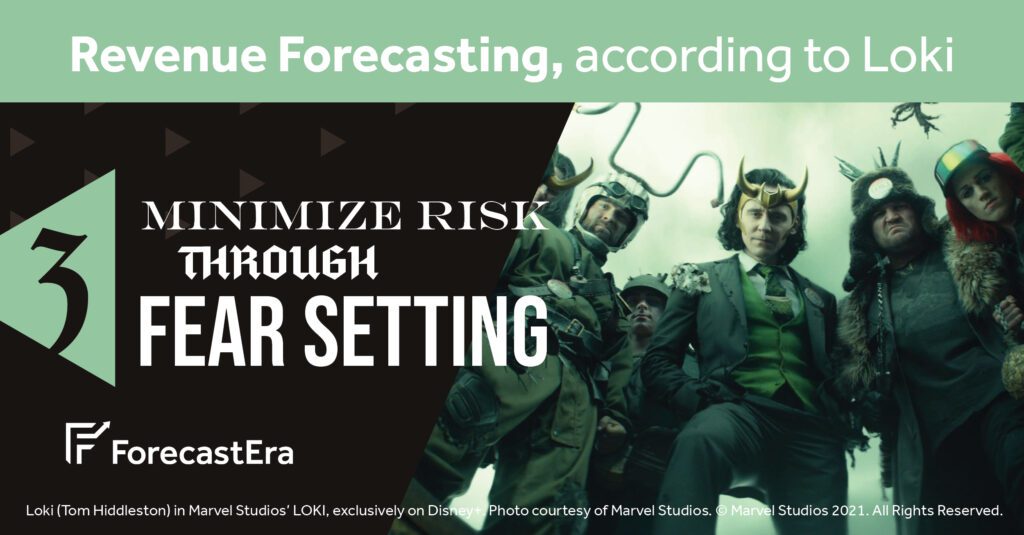 In the first episode, Loki is forced to confront his deepest fears and all the failures in his life. This fear confronting is a skill CFOs need to cultivate.

Fear setting is the practice of thinking through your worst fears and how you react to them.

Most people only do this when their backs are against the wall. Some people, like lifestyle guru Tim Ferriss, fear set monthly, to get in front of their worst-case scenarios. This echoes an ancient Stoic practice called Premeditatio Malorum.

There is a sister practice called premortem, where the C Suite assumes that a future project has already failed. The executive team then works backward to determine what potentially could lead to the failure of the new project, so that they can better plan for “not failure.”

By anticipating the failure points before they happen, companies can try to plan for a successful pivot.

Fear setting and premortems have their limits The recent unexpected pandemic showed gaps in many companies’ business planning.

Failure points in both client/consumer demand and shortfalls in the supply chain could have been anticipated by CFOs (and others such as operations teams) if they had war-gamed extreme, worst-case scenarios.

Other companies pivoted to the only profit centers left available to them. Restaurants tried to survive by shifting from eat-in dining to delivery. Whether they persevered came down to profit margin, credit and cash reserves, the realm of the CFO. 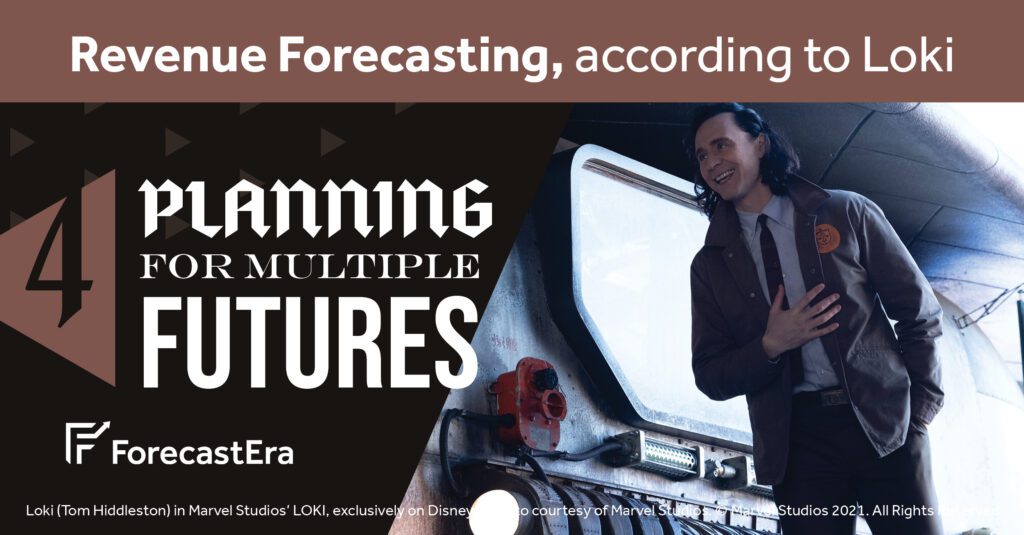 Loki is captured by and is forced to work for the Time Variance Authority (TVA), a bureaucratic agency whose sole purpose is maintaining “the sacred timeline.” Loki learns that the TVA “prunes” (destroys) people whose actions vary from this sacred timeline to eliminate all alternate timelines.

The CFO can’t, unfortunately, turn back time when hindsight proves to be unfavorable. The CFO needs to spin out scenarios for each next move, new products, new territories, new approaches, etc. Revenue forecasting is the lifeblood of an organization, so the CFO needs to wisely navigate both the short and long terms.

The CFO needs to be able to analyze multiple futures with a few clicks; they can’t spend time asking every department to generate spreadsheets. They can’t spend time analyzing that much generated data. They need to invest in tools that do the data aggregation and analysis.

Only by knowing where you are right now and how you got there, can you plot where and how you need to go. But there’s a problem with just looking backward.

There is a saying (misattributed to Henry Ford or Albert Einstein), “if you think/do what you’ve always thought/done, you’ll always get what you always got.” This brings me to the next big lesson from Loki. 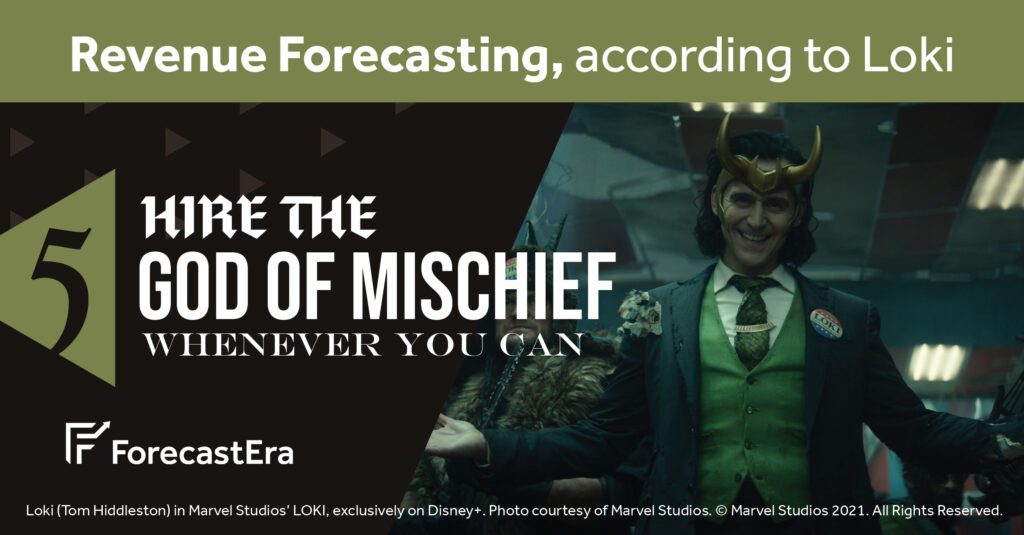 5. Hire the God of Mischief Whenever You Can

Loki is awaiting his sentencing for crimes against the sacred timeline when he is saved by TVA agent Mobius who wants to use Loki’s insight and skills to catch an elusive time criminal.

That fugitive is a female version of Loki, named Sylvie. Mobius thinks it takes a Loki to catch a Loki. It turns out he’s right.

The business lesson from this is about who the CFO hires as part of their finance team. If you hire clones of yourself, what additional value do these clones present aside from merely time-saving and ego-boosting?

Abraham Lincoln famously chose a “team of rivals” as his cabinet so that he could get a diverse range of outlooks. As CFO, you need to hire for your blindspots, people who think in different ways or have the expertise you don’t.

Hiring talent based on their diverse expertise is how Marvel Studios has created $22.8 billion (and counting) in worldwide box office revenue. Marvel doesn’t cookie-cutter their movies. They make films in different genres where the characters happen to be superheroes. Captain America: The Winter Soldier is a political thriller, Ant-Man is a heist movie, Thor: Ragnarok is an action-comedy. Marvel hired directors and writers who had expertise in those genres and then taught them the superhero stuff.

When you think of hiring your Financial Planning and Analysis (FP&A) team, think about hiring the mindsets you need, and then teach them your business.

Loki combs through the past to find where in the timeline Sylvie is hiding. Thinking like a Loki, he realizes that she is hiding in various disasters in the past where no one made it out alive and where the TVA would never look.

If your revenue forecasting is based on a bottom-up build tied to your sales/CRM system, you can do the same thing by looking for anomalies in the past. One key thing is to make sure you have the forecast snapshots so you can track the forecast accuracy. Understanding the areas of under/over performance against historical forecast data can help you uncover areas of revenue leakage that might be hiding potential profits.

The best analogy might be found at the race track.

Some horses are lackluster on normal days but are speed demons when it is raining. These horses are called mudders. If the track is sloppy, bet on the mudders.

Profits are like ecosystems; some lifeforms thrive in conditions that would be deadly to others.

If you have a fully integrated sales and finance system, you can look at the entire history of your revenue to spot those hidden opportunities. If your finance models are predicting rain, look for past mudders. 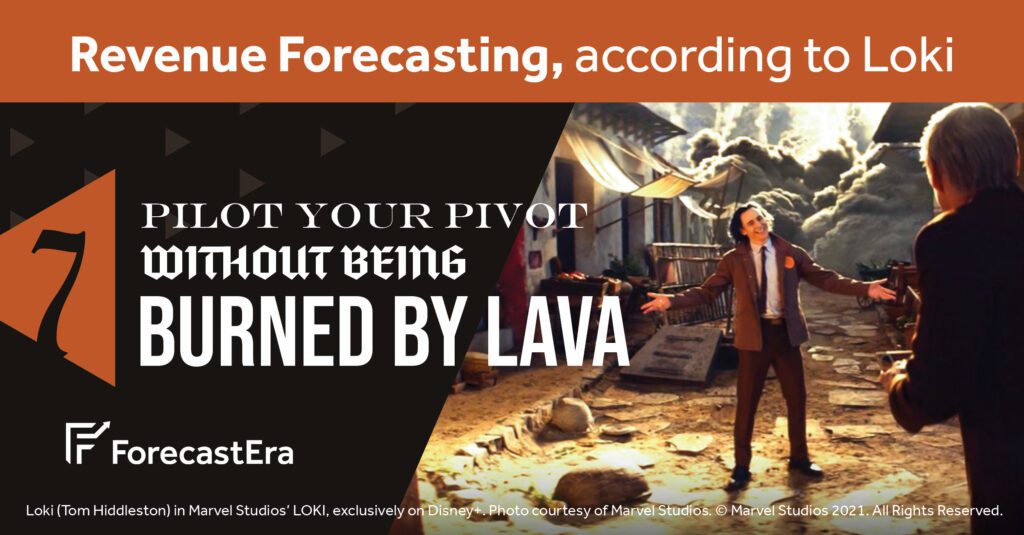 7. Pilot Your Pivot Without Being Burned by Lava

Loki takes Mobius to Pompeii in 79 A.D., to prove his theory. He creates all sorts of small chaos events right before the ancient Romans are about to be destroyed by Vesuvius’ fast-moving pyroclastic blast. Loki and Mobius return to the TVA with a new plan to catch Sylvie.

As CFO, you might have a strong feeling that one path to profitability is best, but you need to prove it. If possible, pilot your pivot in some small way. 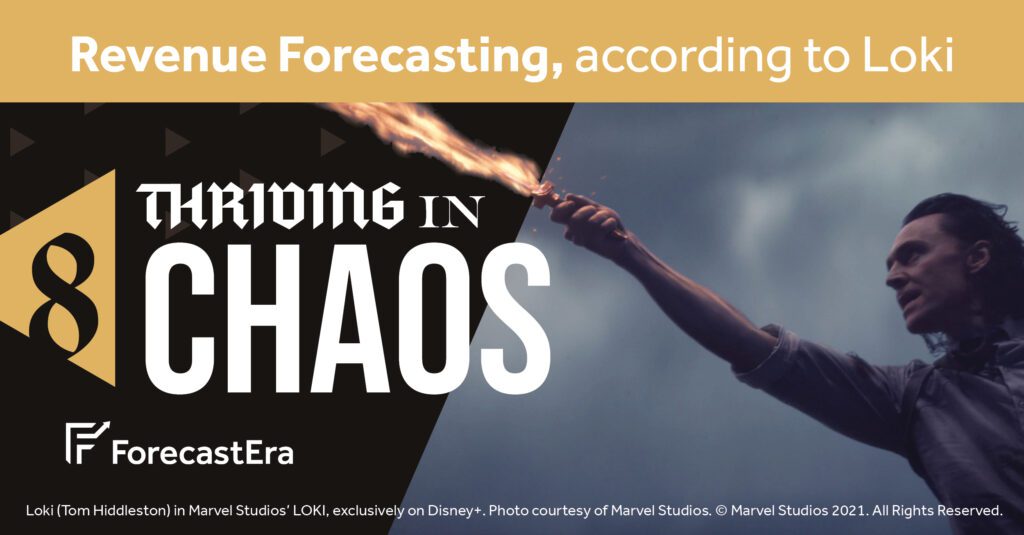 No battle plan survives first contact with the enemy. A pilot pivot might teach you valuable lessons in a small skirmish that you can apply to work through the chaos and win the war.

Survival doesn’t grace the strongest, but those who adapt the fastest. Kodak failed to see digital photography coming. Microsoft failed to recognize the importance of the web. There are countless examples of behemoths slain by environments where they couldn’t or chose not to adapt.

So when you, like Loki and Sylvie, find yourself in environments where chaos reigns (and you will), you will survive based not on the soundness of your previous plan, but on how quickly you can adapt.

That is why revenue operations need to have real-time, 360-degree sales and finance data. Life moves at internet speeds and your organization needs to be nimble enough in your scenario planning and decision making to adapt just as fast.

This is why we created ForecastEra’s Revenue Navigator so that finance teams from the CFO to FP&A to accounting can all adapt in real-time. You should schedule a demo today before the God of Mischief brings chaos to your company.